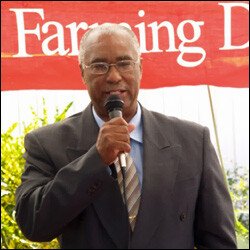 “Agriculture and Tourism could be a positive link for Nevis,” said Premier of Nevis, the Hon. Joseph Parry as he delivered remarks at the St. Kitts & Nevis Tourism Agricultural Project at Cades Bay on Thursday morning.

The occasion, captioned: “Intensive Farming Demonstration Tour,” was sponsored by the Ministry of Agriculture on Nevis and the Taiwan Technical Mission.

“In Nevis, I believe and anticipate that Tourism can pull along Agriculture; but linkages must be firmly established,” said the Premier. He indicated that a number of hotels on Nevis have expressed their willingness to continue to buy locally grown food once they can be assured that the produce will always be available.

It was believed many years ago that only during the rainy season most food crops could be grown, but that matter was debunked years ago when former Agricultural superintendent, Mr. Augustine Merchant was able to have the Agricultural extension service work closely with hotels to produce locally grown food all year round.

According to Premier Parry, the policy was so successful that it was dubbed The Nevis Model by the University of the West Indies and adopted throughout the Caribbean.

Presently, Nevis is self sufficient in onions and tomatoes; and the local abattoir is producing sufficient amounts of quality meat.

The Premier said that he hopes the local farmers can provide more food to hotels thereby cutting down on the amount of money leaving the island.

Finally, the Premier noted that it is evident that Nevis can not be totally self-sufficient with growing all of the food it needs to sustain the entire population, but it is possible to grow most of the food we need, and be able to export some too.