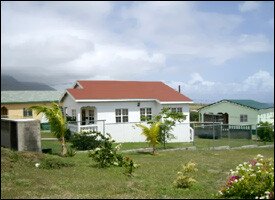 Nearly 250 lots have been made available for new residences at the White House Garden Housing Development.

The Federal Cabinet during its recent meeting also allocated scores of lots for housing in the areas of the Boyd’s, Keys and Newton Ground.

“Cabinet approved the release of approximately 240 housing lots at White House Garden Housing Development at St. Peters. These lots are being offered under the Special Land Development Initiative (SLDI) with a starting price of $2.95 per square foot,” Minister of State, Sen. the Hon. Nigel Carty said Thursday.

He said that housing lots at the White House Garden Housing Development at St. Peters range in sizes from 6,000 to 9,000 square feet and occupy 49.5 acres of land.

Minister Carty noted that under the SLDI, individuals receiving allocations of lots are required to make a down payment of just $100 after which a moratorium of two (2) years is granted.

“That is, over the next two years, individuals are not required to make any additional payments, but can begin to build their dream home,” said he said.

He disclosed Cabinet also recently approved the release of 118 lots of land in the Boyd’s area, and other lots at a number of sites in Keys Village and Newton Ground.

Prime Minister Douglas, who is also Minister responsible for Lands reported to Cabinet that the Land Committee continues to meet under his supervision once per week and intimated that there is a heightened level of efficiency in the distribution of lands under the SLDI.

Dr. Douglas also outlined a number of areas where residential lots are soon to be distributed.