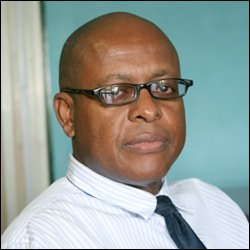 “The United States [US] economy is showing signs of recovery even though job creation is sluggish, however, despite this trend, considering that we [Nevisians] are linked to the US, it is expected that Caribbean countries will lag behind the growth in the US and thus 2011 will be challenging,” said Permanent Secretary in the Ministry of Finance, Mr. Laurie Lawrence.

P.S. Lawrence, who spoke recently at the island’s fourth annual Consultation on the Economy held at the Occasions Entertainment Complex, posed a number of challenges to those gathered and said they [the challenges] were essential to addressing the decline in economic growth.

In his preliminary overview of the consultation, Lawrence said that the world recession coupled with the closure of the Four Seasons Resort [Nevis] had resulted in a loss of jobs. He added that “contraction in incomes had dried up personal savings and forced many persons below the poverty line” but believed that the present economic instability worldwide was the most difficult time that persons had ever experienced.

“There is no doubt that we are a resilient people having endured a history of hardship on our journey from slavery to colonialism to self determination, however, the present economic crisis is even more debilitating,” he said.

Mr. Lawrence underscored that because his ministry was aimed at taking the leadership role in promoting and maintaining financial and economic stability through the development and implementation of sustainable economic growth, he expected the consultation to lead the Nevis Island Administration towards identifying new areas of growth and alternative models of development.

Lawrence, who was adamant that long term economic growth was an essential element in sustaining the island’s economy, said that “based on the high level of debt and the fiscal pressures, the government was limited in the role that it can play in stimulating growth.”

While the panel discussions focused on reforming the tax system to increase efficiency, addressing the decline in tourism and financial services as well as new avenues for growth, P.S. Lawrence believed that the “new avenues for growth” segment was possibly the most important.

“It is a widely held view that tourism in the Caribbean is a mature industry and [it] is losing [its] marketing share and competitiveness as a result of the emergence of new competitors,” he said, but added that “we cannot rely on any one entity to be the engine of growth in the economy.”

In speaking about the reopening of the largest hotel on Nevis, the Four Seasons Resort, P.S. Lawrence showered praises on the island’s premier for his dedication despite what was described as “a labyrinth of blind allies” at times.

He added that the Ministry of Finance planned to prepare a comprehensive report on the consultation and email it to the participants in order that they could be made aware if their ideas take effect.