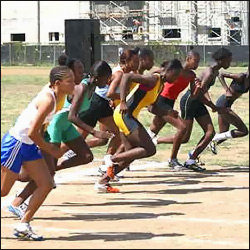 The success of the national delegation which brought home 44 medals from the recent Leewards Islands Junior Athletics Championships continues to draw praise from all quarters in St. Kitts and Nevis.

The radio waves are filled with congratulatory messages from track and field officials, residents and well-wishers. Minister of State for Sports Hon. Richard Skerritt was among those who saluted the 27-man squad which reportedly won 18 gold, 11 silver and 15 bronze medals.

“I extend congratulations on behalf of the Ministry of Tourism, Sports and Culture to the coaches, athletes and officials of the St. Kitts athletics team for the impressive performance “¦ in the British Virgin Island,” a letter sent to the President of the St. Kitts and Nevis Athletic Association Raphael Jenkins stated. “The team successfully retained the championship title, and this certainly reinforces the credibility of our athletic programme in St. Kitts. This is also testimony to our athletes’ potential and the efforts made by the coaching staff and the management officials of the [SKNAAA] to prepare them for such levels of competition.”

The letter specifically made mention of Meritzer Williams, Lestrod Roland, Jason Rogers and Jevon Claxton of Nevis and called for the Ministry and the SKNAAA to continue working together in order to maximize the benefits which track and field afford our athletes.

St. Kitts won the competition with a total of 140.33 points. They were followed by host country BVI with 89.67 points and Nevis rounded out the top three with 74 points.