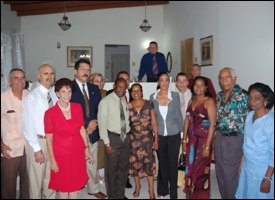 Cuba’s Resident Ambassador to the Federation of St. Kitts and Nevis, Her Excellency Ana MarÃ­a GonzÃ¡lez informed Prime Minister Hon. Dr. Denzil L. Douglas and Minister of Health, the Hon. Rupert Herbert, during an informal dinner where the met with the resident Cuban medical team, that more than 15,000 patients were screened by the Cuban ophthalmologists during the Miracle Eye Care Mission between August 2005 and April 2007.

The Cuban diplomat said 800 nationals went to Cuba with 715 of them undergoing surgery.

Medical Cooperation between Cuba and St. Kitts and Nevis began in 1996 with the arrival of the first group of Cuban doctors, who along with health technicians have been working at the Joseph N. France General Hospital.

Prime Minister Douglas and Minister Herbert received informal reports from senior medical specialists and engaged them in areas of concern.

The government officials thanked Ambassador GonzÃ¡lez and the medical team for touching the lives and improving the healthcare of the people of St. Kitts and Nevis.

Prime Minister Douglas noted that the Federation of St. Kitts and Nevis and the Republic of Cuba have developed sound bonds of friendship and expressed confidence that the relationship will continue to grow from strength to strength and  redound to the mutual benefit of both peoples.