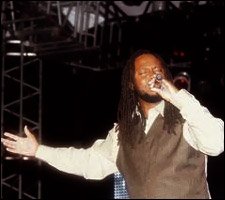 The three-day event from June 29th to July 1st is jointly sponsored by the Ministry of National Security and TEMPO and is aimed at supporting an anti-violence message with a high energy presentation/performance for the youth and will include local and regional artistes.

Among the regional artistes are Jamaica’s Singjay Queen Ifrica and Duane Stephenson.

Ventrice Morgan, Ifrica, is the daughter of ska legend Derrick Morgan and has had a strong run of hit songs in the past two years, starting with the catchy Below The Waist. Montego Bay is her second album. The first, Fyah Mumma, was released in 2007.

It’s been a little over two years since Duane Stephenson parted company with the sextet To-Isis. But in that time he has already managed to carve a niche as a soul/roots singer whose stocks are rapidly on the rise.

Already he has toured the United States and the Caribbean, has a European tour lined up for this summer and an album due out later this year to follow up on the success of his first, the critically acclaimed August Town that was released in late 2007.