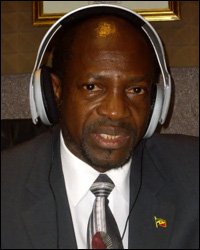 “Ask the Prime Minister,” which premiered on ZIZ Radio last October 21st 2008 is being syndicated simultaneously on three other radio stations.

Besides ZIZ Radio on both the AM and the FM frequencies, the one-hour programme on Tuesdays can be heard simultaneously on Kyss FM (102.5 FM), Sugar City Roc (90.3 FM) and Radio One (94.1FM).

The programme airs every Tuesday at 10:00 A.M. and provides another opportunity for the ordinary citizen to speak with the St. Kitts and Nevis leader.

Citizens are able to phone and speak directly with Prime Minister Douglas, or email questions, their suggestions and comments with the aim of making St. Kitts and Nevis a better place to live by calling the open line on 465 ““ 2555 or email: askthepm@zizonline.com

“The Ask the PM radio shows in addition to the weekly police report publication is an outstanding example of transparency in government,” said a leading and active member of the St. Kitts-Nevis List, Mr. Vernon Covington, adding: “Giving any person, the only requirement being access to a telephone, the ability to question the nation’s leader, is a privilege rarely if ever afforded the man on the street. True Democracy in action.

The radio programme is one of a series of ongoing programmes of transparency, good governance and accountability to interact with the people initiated by his St. Kitts-Nevis Labour Party Government since it took office in July 1995.

The other programmes include “Face to Face” which allows the Prime Minister and all his Ministers to sit in a Town Hall setting and field questions from persons in the audience, via the telephone or the internet; the Monthly Prime Minister’s Press Conference, the Post Cabinet Briefings, which informs of the issues discussed and the decisions taken in the Cabinet; more regular meetings of the National Assembly, live television coverage of the National Assembly meetings, the National Consultation on the Economy, the establishment of the Communications Unit in the Office of the Prime Minister (CUOPM), the establishment of the Prime Minister’s Website and the consultation with stakeholders on draft legislation before passage in the lawmaking body.