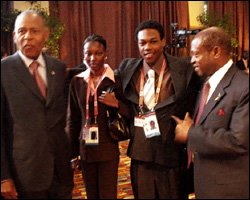 The ideas, techniques and experiences gained by the young scholars who attended the recently concluded 5th Summit of the Americas, will be used to further enhance the youth population.

This was disclosed by State Scholar Agiel Browne and runner up Azard Gumbs on this week’s edition of SKNIS Perspectives. The duo was part of the Federal delegation attended the April 17 to 19, OAS Summit held in Trinidad and Tobago.

Ms. Browne said that many of the issues that were discussed at the Summit can be addressed by youth in the Federation. “Ways of protecting the environment and issues surrounding energy security are some of the matters that we can look at,” she said, adding that she will raise the topics with fellow members in the Nevis LEO Club. “We will be making some suggestions.”

Mr. Gumbs, a community activist, echoed similar sentiments. He stated that he was grateful for the opportunity which allowed him a peek into inter-government relationships.

“I have always had an interest in public service,” Gumbs stated. “I love interacting with people and I love [brainstorming] about what needs to be done in order to bring about social, economic and political change where needed, if needed.”

The young people got an “up close and personal” view of relations between heads of states, when they sat in on a meeting between ministers of foreign affairs, non-governmental organizations and civil society. The broad range of topics generated much food for thought and had a distinct international flare.

A document on related issues that affect young people was also presented at the meeting. The conclusions were the result of a youth forum held prior to the start of the Summit.

Ms. Browne expressed pleasure with the high standard of exchanges while Mr. Gumbs said he felt a great deal of pride with the quality of recommendations in the document. Both youth delegates wished greater involvement of young people in decision making on the national and regional levels.

“We need that experience at an early age in order to “¦ take the step forward to become productive leaders and understand procedures at that level,” the young man stated, while Ms. Browne said the involvement of youth was “good to see.”

While in Trinidad, the young delegates also interacted with peers and had an opportunity to sit in on a meeting which was attended by United States President Barack Obama.

Browne and Gumbs were grateful to the Prime Minister Honourable Dr. Denzil Douglas for including them on the Federal delegation.