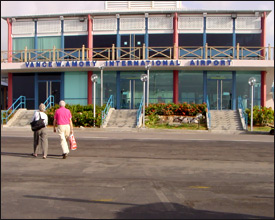 St. Kitts and Nevis‘  Prime Minister and Minister of Tourism, Hon. Dr. Denzil L. Douglas was among Caribbean Community (CARICOM) leaders who began their first full day of deliberations on Wednesday focusing on the tourism sector that has been a key contributor to their countries’ economies.

There are concerns that recent global developments, such as the rising cost of fuel and changes in flight schedules by US-based airlines, could undermine the viability of an industry that provides thousands of jobs for Caribbean nationals.

The leaders heard special presentations by St. Lucia’s Tourism Minister and Chairman of the Caribbean Tourism Organisation (CTO) Hon. Allan Chastenet and his Antigua and Barbuda counterpart, Hon. Harold Lovell, on efforts to make the sector more competitive in light of the new threats, including a 17 percent cutback in airline services from the United States, – the region’s main tourism market.

Chastenet told the Caribbean Media Corporation (CMC) that oil prices were expected to reach an estimated US$170 a barrel and that this could also be accompanied by a 20 percent cut in capacity by the US airlines industry.

“Clearly, as the price of oil continues to increase, that may get more serious,” he said.