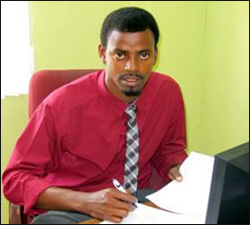 Kittitian-born Meshach Alford of St. Paul’s has graduated from the University of Aberdeen, Aberdeenshire, United Kingdom with an  MSc in  Sustainable Rural Development with Commendation.

It is an accomplishment which he says is the result of hard work, determination and the steadfast support of family and friends.

He excelled while at these institutions having been awarded Most Outstanding Male of the Sandy Point High School’s graduating class of 2000 with nine CXC subject passes and a CAPE diploma in four major subject areas from the Clarence Fitzroy Bryant College.

The prestigious University of the West Indies was next on his list of academic pursuits. He completed a four year undergraduate programme, obtaining a BSc. in Law and Sociology (Hons) in 2008 from the University’s Cave Hill Campus, Barbados.

As Meshach moves on to the next phase of his career he wishes to thank the St. Pauls community for assisting in the compilation of data for his thesis. A noteworthy piece aptly titled “˜Flooding and Land Use Changes in St. Pauls, St. Kitts: A Case Study on Rural Development, Environmental Change and Social Perceptions of Risk’. A dedicated youth and community activist he continues to support the growth and development of local youth through the knowledge and experiences gained.

Meshach has expressed thanks to his family and close friends for their encouragement, guidance and dedication throughout every stage of his journey.

The Communications Unit in the Office of the Prime Minister (CUOPM)  wishes Meshach the best in his future endeavours.