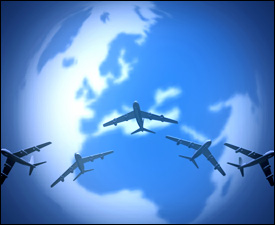 Open Skies Agreement Would Be Favorable For Tourism

The Government of St. Kitts and Nevis has given the greenlight for the twin-island Federation to begin negotiations with the United States of America for an Open Skies Agreement.

The Federation’s Minister of Tourism and International Transport, Sen. the Hon. Richard Skerritt, in bringing this important matter before the Cabinet, explained that the intended outcome of achieving an Open Skies agreement with the USA is to derive mutual benefit for the two countries particularly during this period of global economic downturn.

Minister Skerritt specifically advised that a successful agreement, if reached, would help establish rules to facilitate growth of an efficient, market-based aviation system, enhancing potential for business, investment, exports and tourism; and the strengthening of bilateral ties with the USA.

Open skies is an international policy concept which promotes the liberalization of rules and regulations for the international aviation industry, particularly commercial aviation, thereby opening up a free market for the airline industry. An Open Skies policy gives effect to the Convention on International Civil Aviation signed in Chicago in 1944.