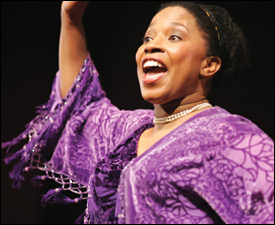 Renowned African-American opera and Gospel singer ValLimar Jansen is in St. Kitts as guest of the Immaculate Conception Co-Cathedral.

The Catholic Inspirational speaker and talented leader, retreat director and voice trainer will perform at a Gospel Concert at the Eastern Caribbean Central Bank (ECCB) Auditorium at 7:00 pm.

She has a packed agenda which includes Rehearsals with the Choirs, a visit to the Immaculate Conception Catholic School (ICCS) on June 3rd; Sunday Eucharist at the Catholic Church on June 5th at 8:30 am a Retreat with Women on June 6th and Workshops with Choirs on June 7th.

ValLimar Jansen has sung sacred music since she was five years old. She trained as a Fine Arts major at Howard University in Washington D.C., and completed her BA at California State University, San Bernardino. Val completed her Master’s Degree at the University of California, Santa Barbara. She is near completion of her Ph.D., in Dramatic Arts, from the same institution.

ValLimar has sung and toured professionally throughout the United States, Switzerland, France, Germany, Belgium and Japan. She played the role of Beneatha, with the Broadway touring cast, in the European Premier of Raisin. ValLimar went on to co-author a one-woman musical about the life of Ethel Waters that received a special commendation from the Kennedy Center in Washington, D.C.

ValLimar is a college/university professor, a leader of worship and prayer, and a workshop presenter at conferences across the United States.

Her husband, Frank Jansen has been a professional musician for thirty years. He is a well-respected composer, arranger, performer, and teacher. He has a Bachelor’s Degree in Music Composition. Frank also holds a Masters degree in Liturgical Music from Santa Clara University. He has been the composer/arranger for numerous Jazz Liturgies and concerts at the Los Angeles Religious Education Congress. He has also been a member of the Los Angeles Religious Education Congress Ensemble that plays for the Sunday Closing Liturgy with Cardinal Roger Mahony. He has performed with Marty Haugen, David Haas, Bob Hurd, Donna PeÃ±a, Grayson Warren Brown, Christopher Walker, Tom Kendzia, Tom Booth, Gary Daigle, Rawn Harbor, and Jaime Cortez. He is the arranger, keyboardist, and co-producer of GIA’s new CD: Catholic Classics: African-American Sacred Songs. He can also be heard on Jaime Cortez’ newest CD, Sacramentos.

Frank has been guest pianist, composer, and arranger for Jazz Liturgies and concerts at the San Jose Jazz Festival, as well as the Sacramento Jazz Festival. He and his wife, ValLimar, are also very busy performing with their own concert group. Their recent CDs, Praise God, Surrender All, and The Mass of St. Athanasius have been very successful in the independent market.

In addition to liturgical composition, Frank writes and performs in a variety of other styles. In past years, he played with The Coasters, The Platters, The Drifters and Jan & Dean. He has written many jazz compositions for both big bands and combos. He has recently completed his first symphony.