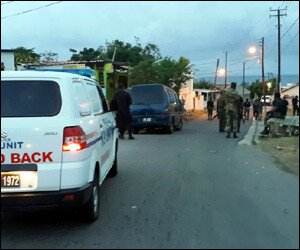 A stop and search in Basseterre early Saturday morning (June 11) has resulted in the confiscation of an illegal firearm with matching rounds and the arrest of one individual.

According to Assistant Commissioner with responsibility for Operations, Vaughan Henderson; “Sometime around 3:45 am on Saturday our tactical patrols were out on duty and while patrolling they stopped and searched a young man and the vehicle he was driving. During the search, one illegal pistol was found with matching rounds of ammunition. It is expected that a number of charges would be brought against him.”

The confiscation and arrest underscores the increased vigilance of the security forces in crime fighting and comes days after the Police High Command shared information during an interview on ZIZ Radio about their beefed up ongoing operations to enhance public safety in the Federation.

“If you are a criminal, you should feel very uncomfortable to carry a gun or any offensive weapon. You are likely to be stopped and searched randomly,” was the caution given to criminals by the High Command during the radio appearance last Thursday (July 09).

The Police High Command congratulated the hard working police officers involved in this case, stating that their dedication, vigilance and commitment resulted in one less illegal weapon being in the hands of criminals.

“We did say criminals should feel very uncomfortable to carry around guns or any offensive weapons and we meant every word! We will continue our aggressive approach in dealing with violent crimes. Our stop and searches are critical and will increase. We will carry out more aggressive random stop and searches, we will search more residences and abandoned houses. We will be more visible in and around hot spots and on our streets in general,” said the ACP responsible for Operations.

Henderson thanked the general public for their “turbo boost of support and information.” St. Kitts – Nevis residents are encouraged to say something, if they see or hear anything. Call Crime Stoppers, the confidential hotline, at 1-800-8477 to share information.

Commenting on the arrest, Acting Commissioner Stafford Liburd stated, “Our officers are highly motivated and they have assured me that they won”â„¢t let up until the bad apples get the message that enough is enough.”