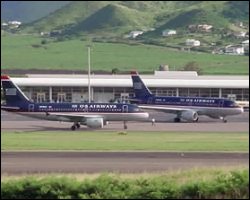 US Airways Planes In St. Kitts
Photo By Erasmus Williams

The St. Kitts and Nevis Air and Seaports Authority (SCASPA) is reporting a ten percent increase in cruise passenger arrivals for the first quarter of this year compared to the same period last year.

SCASPA is also reporting a near four percent decrease in passengers arriving at the Robert L. Bradshaw International Airport for the first three months of 2011.

SCASPA reports 33,332 passengers arrived at the Robert L. Bradshaw International Airport for the first quarter of this year compared to 34,708 passengers, a drop of 1,376 or a 3.96 percent decline.

SCASPA also reports a 14 percent increase in cargo exports and a 22 percent decrease in cargo imports through the airport for the first quarter of this year.

SCASPA’S Statistics Department reported a 13 percent increase in the export of alcohol and non-alcohol beverages; a 100 percent export of building materials and a 9 percent drop in the export of refer cargo/frozen items.