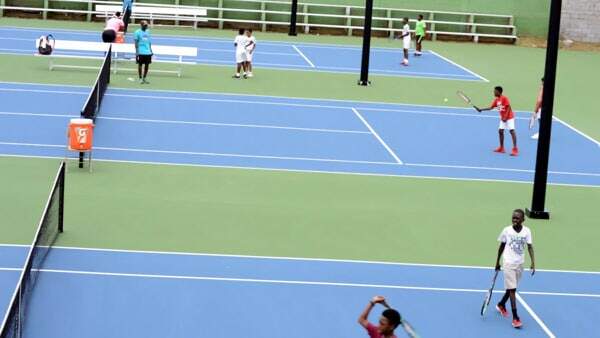 The Department of Sports is implementing initiatives that it hopes will help to spur growth, particularly among young children, when it comes to tennis.

This week, the department is hosting its annual Primary School Skills and Mini Tennis Competition, which is sponsored by the S. L. Horsfords and Company Limited. Student athletes between the ages of 10 and 12 years from the Beach Allen, Bronte Welsh, Dr. William Connor, George Moody Stuart, Irishtown, Seventh Day Adventist, and Tucker Clarke Primary Schools are participating.

On Wednesday (May 02), the doubles segment of the annual competition commenced but had to be postponed due to inclement weather. The singles segment will be held on Thursday (May 03), at the renovated tennis facility at Warner Park. Tennis Coordinator in the Department of Sports, Ludis Francis, said that about two years ago, the three tennis courts were resurfaced, new nets were installed and outdoor sport lights were mounted.

Ms. Francis noted that tennis is a good alternative to the more popular sports of football, basketball and cricket, and added that the efforts to grow the sport within the school system are bearing fruit.

“We as coaches go out to the schools and we try and teach skills at the grassroots level so that they can learn the skills first … so that they will be able to play properly, proper strokes, proper understanding of the sport,” Ms. Francis stated. “Children like when they see their peers doing it; they want to get involved too and that is very good because the more children that we get into sport is better for us.”

The tennis coach added that the upgraded facility has been well received as growing numbers have been making use of the courts.. The increasing numbers are not limited to children but more adults are also taking up the sport or are returning to the game.

Coordinator Francis reflected on her 17 year career at the Department of Sports and expressed her mid-term goals for the growth of tennis in St. Kitts and Nevis.

“At one point, we (St. Kitts and Nevis) were in the ITF (International Tennis Federation) and we are hoping that we could get some younger kids that we can get back to the ITF [level] so that our children can be playing in regional competitions,” she said.

Her hopes went all the way to the possibility of having a team representing the twin-island Federation in the Davis Cup one day. The long-term desire may seem farfetched to some but with government’s continued investment in the sport and the all too familiar tale of athletes from St. Kitts and Nevis, who have represented well in their respective sport, such as Kim Collins in track and field, that level of success seems a bit closer.