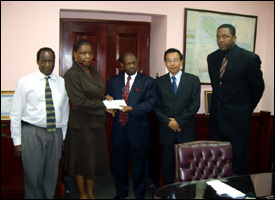 The advancement of the young people in St. Kitts and Nevis is critically important in building a just, long lasting and fulfilling society.

So says Prime Minister and Minister of Sport, Hon. Dr. Denzil L. Douglas as he accepted two cheques totalling nearly US$400,000 for the development of sporting facilities in Challengers and Half Way Tree from the Ambassador of the Republic of China on Taiwan, His Excellency Rong-chuan Wu. US$284,000 is for Half Way Tree and US$115,000 for Challengers.

“All over the world and the Caribbean, including St. Kitts and Nevis, our young people are being challenged. We hear very often of the ills that they may be associated with. We hear very often that they are restless, that they are involved in serious crimes, that maybe enough is not said about them in terms of their true potential that needs to be developed and harnessed in the betterment of their country,” said Dr. Douglas, himself a former sports administrator.

Dr. Douglas said the financing which will see the development of sporting facilities in Half Way Tree and Challengers, will give the young people of both areas “the opportunity to build their sporting skills so that they can use their past time in a very worthwhile way.”

He repeated a comment made at last Saturday’s official opening of Football House, that there is money to be made from sports.

“Our young people need to harness their skills, especially in the sports that we have for many, many years excelled. We need to ensure that our young people in Half Way Tree and Challengers continue to develop their sporting skills in football, cricket and basketball,” said Dr. Douglas.

Prime Minister Douglas expressed thanks Ambassador Wu for his generosity and that of his Government for assisting St. Kitts and Nevis in the development of sports and the sporting infrastructure.

In presenting the cheques, Ambassador Wu Proud said the Republic of China on Taiwan was proud to continue to contribute to the significant progress in the development of the infrastructure in St. Kitts and Nevis.

Financing for several projects were agreed to by the Governments of the Republic of China on Taiwan and St. Kitts and Nevis during an Official Visit to Taiwan by Prime Minister Douglas, who held talks with then President His Excellency Chen Shui-Bian.

Newly-installed President, His Excellency Dr. Ma Ying-jeon has told Prime Minister Douglas he is committed to the promises made to the Government and People of St. Kitts and Nevis when the Federation’s leader visited Taipei in late January/early February this year.