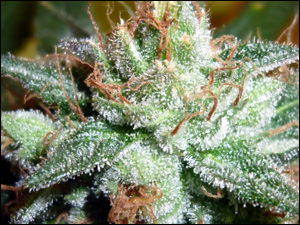 Marijuana with a street value of nearly half a million dollars along with a firearm and ammunition were seized by St. Kitts – Nevis police during patrols on Tuesday.

Police said the Drug Unit in conducting several patrols in Conaree, New Town, Taylors and the entire Monkey Hill and Shadwell area, stopped and searched eight (8) persons on suspicion of having in their possession of controlled drugs, arms, ammunition, stolen goods and documents used in the commission of a crime.

During the search of one of the vehicles, police searched two back packs belonging to Rajhan Ferdinand of Lower Monkey Hill and Shakeem Parris of Shadwell Housing and found a large quantity of marijuana.

Both men were arrested. During interrogation, police were later taken to an area in Milliken where they got the cannabis from and an additional 276 plants were discovered.

Further investigation during a search with a warrant of a house occupied by Ferdinand, police found a quantity of cannabis hanging in the bathroom.

Police estimate street value of the drug find on that plot of land and in the vehicle at EC$210,000.00.

In another drug find on Tuesday, police found a marijuana plot with 437 plants. The plants which ranged from 2ft to 15ft in height were uprooted and seized and are to be destroyed by burning. Police estimate the street value for this find at EC$262,200.00.

Police also confiscated one Glock 27 semi automatic with a magazine containing six rounds of ammunition in the vehicle that Ferdinand and Parris were in.