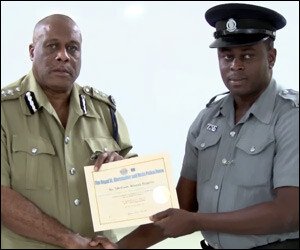 A new generation of instructors for the Royal St. Christopher and Nevis Police Force, St. Kitts and Nevis Fire and Rescue Services and Her Majesty’s Prison are prepared to take up the mantle to train the newest members of the security forces.

Eleven police officers, two fire officers and two prison officers completed the first Instructor Development and Classroom Management Course which ran from April 14 to 27 at the Police Training School. They covered topics such as the role of the trainer, identifying learning styles, principles of adult learning, preparation of lesson plans, and dealing with stress. Practical aspects saw the execution of drills which is important in reinforcing standards in the agencies, as well as power point and other forms of presentation.

Deputy Commandant of the Police Training School, Inspector Eldrin Dickenson, noted that the course was welcomed as the training regimen for police recruits should begin shortly. Additional instructors will also be needed for the expected increase in demand that will accompany the completion of the joint security training academy in 2016.

Constable Ronrick Huggins of the Nevis Division attended the course and described it as challenging but noted that it will serve them well as they pursue this new role in the police force. His colleague, Constable Maaisha Liburd referred to interaction with other trainees and shared their opinion that while there were a lot of nerves and apprehension they were pushed to the limit and dug deep down to succeed.

“It is the general consensus of the participants that their expectations were met and the course was of a high standard and was beneficial to all,” Liburd said. “At the end of the training, we the participants now feel that we are capable and confident in delivering any topic effectively and efficiently.”

Acting Commissioner of Police Stafford Liburd congratulated the participants for their success. He referred to the aforementioned joint security training center under construction and reminded that trainees from across the Caribbean region will travel to St. Kitts and Nevis. As such, he said it was important “to maintain a standard” bonded to improvement.

Plans were also outlined for two similar courses to be held later this year that will cater to corporals, sergeants and inspectors of police.

The training course was supported by the European Union.