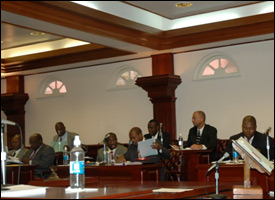 The St. Kitts and Nevis National Assembly meets next week.

According to the Notice from the Clerk, Mr. Jose Lloyd, the lawmaking body meets on Wednesday March 30th at 10:00 A.M.

It brings to three the number of meetings so far for this year, the lawmaking body having met on February 9th and March 17th, an average of one meeting per month to date compared to an average of three meetings annually under the previous People’s Action Movement (PAM) Administration in its 15 years in office.

It is documented that during the tenure of a People’s Action Movement (PAM) Administration; good governance took a back seat with few meetings of the National Assembly.

“Time for Action” ““ the Report of the West Indian Commission, headed by the eminent Caribbean citizen, Sir Shridath Ramphal found that the St. Kitts and Nevis National assembly had three sittings in 1990.

The Report authored by a group of wise men from the Caribbean found evidence of the infrequency of sittings of Parliament and provided statistics from the various Parliaments.

The report states on page 494 that between January and December 1990, sittings of the Parliaments in the CARICOM Member States ranged from a high of 53 in the Bahamas to 3 in St. Kitts and Nevis.