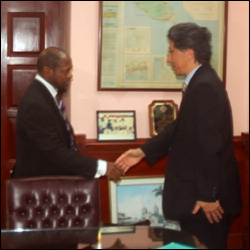 Japan has agreed to a request by St. Kitts and Nevis to assist the twin-island Federation in skills training, technical and vocational development.

Ambassador Tezuka, who earlier presented his credentials to Governor General His Excellency Dr. Sir Cuthbert Sebastian, was told St. Kitts and Nevis looks forward to consolidating and strengthening its already good cooperation with its Asian nation.

The Japanese diplomat thanked Prime Minister Douglas for the kind message received from him following the earthquake and tsunami that devastated a part of Japan.

He told Dr. Douglas that Japan was willing to provide assistance in the areas identified by Prime Minister Douglas and noted recent training in the areas of waste management and fishing.