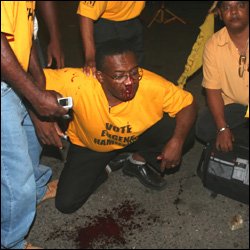 The St. Kitts – Nevis Labour Party has condemned Thursday night’s incident which resulted in the injury of Mr. Eugene Hamilton of the Peoples Action Movement following a political meeting in Old Road.

“This Party has made a priority of urging that all segments of this society work together to ensure that St. Kitts and Nevis is a country in which there is peace and calm. We have, indeed, made a special case of urging a rejection of all and any forms of violence,” said Political Leader Hon. Dr. Denzil L. Douglas, who is also Prime Minister and Minister of National Security.

“The St. Kitts-Nevis Labour Party abhors and renounces all such acts by any member of this society toward any other member – regardless of age or status; religious, political, or professional affiliation,” a statement issued by the Party Secretariat said Friday.

St. Kitts and Nevis is a civilized society and we expect each and every member to conduct themselves accordingly,” said Dr. Douglas in the Party statement.