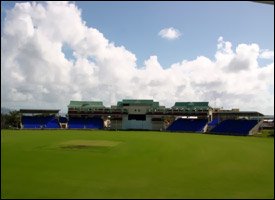 The tremendous achievements by national athletes of St. Kitts and Nevis in recent years were discussed in this week’s meeting of the Cabinet and plans are underway to continue the development of the sporting infrastructure and reform of sporting policies.

During the Post Cabinet Briefing on Tuesday, Minister of State for Information Honourable Nigel Carty reported that a number of capital projects to be implemented by the Ministry of Tourism, Sports and Culture, in the 2009 calendar year were presented for consideration.

“Most of the projects had been preapproved at the 2009 Budget Estimates Committee meeting in October but the Minister of State for Sports Honourable Richard Skerritt was seeking guidance in relation to prioritization,” Minister Carty stated.

Minister Skerritt told SKNIS that while discussions are ongoing; the construction of an indoor basketball and volleyball facility is high on the list of things to do.

“Government is proud of the accomplishments of our national athletes and is poised to continue investing into sporting programmes,” he said. “We are confident that such will improve the health and wellbeing of the population and add to the attractiveness of the Federation as a sports-tourism destination.”

Minister Skerritt stated that the Ministry of Sports will also continue efforts to strengthen partnerships with the community, sporting associations, sponsors and other stakeholders.

Additionally, a review of Government’s sports policy is currently ongoing. The process is wide ranging and takes into account local experiences and structures as well as best practices from regional and international agencies.

The Minister of State for Sports said that the review process got off to a good start last October and his ministry was keen on maintaining the momentum from the constructive exercise.