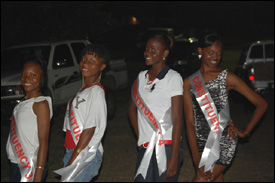 The eight contestants who will vie for the coveted title of Miss Labour 2012/2013 during the annual Miss Labour Queen Show next month has been presented to the public.

The show organizers say more information will be disclosed about the contestants and the show at a later date.

Miss Labour 2012/2013 is set for Saturday 5th May 2012 and is part of the week of activities to mark the annual Labour Day weekend of activities.

The Labour Day March is planned for Monday 7th May.