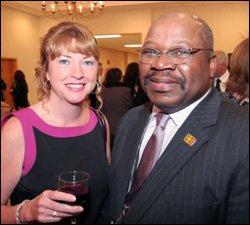 A national of St. Kitts and Nevis has been named one of the Black Business and Professional Association of Canada (BBPA) distinguished Black men for 2010.

When you place an order at Tim Horton’s, the “double double” – two cream and two sugars in your coffee – is evenly dispensed by a machine invented by Michael Duck.

Duck owns A.C. Dispensing Equipment Inc. which manufactures and sells the Sure Shot machine that regulates the amount of cream poured into a cup of coffee.

In addition to being visionaries and successful entrepreneurs, Duck and Gibson have a few other things in common. They are Black Nova Scotians who have been honored with Harry Jerome awards for excellence in business.

Whenever he gets the opportunity, Kittitian-born Rustum Southwell lauds Duck and Gibson’s accomplishments and presents them as inspiration for aspiring entrepreneurs.

Southwell owned a Harvey’s franchise for 11 years before becoming the chief executive officer of the Halifax-based Black Business Initiative (BBI) which has helped to create over 300 Black businesses and nearly 700 jobs in Nova Scotia since it was created 14 years ago.

In 1996, the federal and Nova Scotia governments established the BBI to address the unique needs confronting the province’s Black community. The organization is committed to growing the Black presence in a diverse range of business sectors, including technology, manufacturing, tourism and culture.

“We aim to help young entrepreneurs with growth strategies,” said Southwell who was among nine African-Canadians honoured with the Black Business and Professional Association’s Men of Distinction awards last week at the Fairmont Royal York Hotel. “We have had a strong 14 years despite the fact that we have had to turn down companies who have approached us without strong business cases.

“Unfortunately, the Black community tends to go into low-return service industries. We have tried to get people to look at non-traditional types of operations. The majority are into retail services and construction. We also try to get people away from Black hair care and the restaurant businesses and we encourage them to look at the information technology and environmental sectors.”

Southwell, whose Dominican-born father Paul was the first Chief Minister of St. Kitts, Nevis & Anguilla and later Premier following the death of Robert Bradshaw, said his organization has been working with the BBPA and groups in other metropolitan cities, including Montreal and Vancouver, to set up national Black business networks similar to the BBI.

A student teacher in St. Kitts who aborted medical studies after a year at the University of the West Indies Cave Hill campus in Barbados, Southwell migrated to Halifax in 1972 and immersed himself in business.