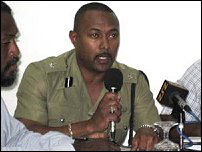 Kittitian-born Director of Plans, Intelligence & Law Enforcement for the Regional Security System (RSS) in Barbados, Mr. Ian Queeley, was among representatives from the Caribbean who were recently hosted by the Florida National Guard.

“This is important for Florida that we have relationships with these Caribbean nations as we face similar threats of natural disasters and the flow of illegal narcotics into our states” said Florida National Guard State Partnership Coordinator Lt. Col. Stephen Dowdie, who conducted the tours and briefings for the RSS representatives.

Lt. Col. Dowdie explained that the visit was not just about enhancing relations between the Florida National Guard and the nations, but was constructed to really introduce the Caribbean visitors to Florida programmes that could be modeled and add value to the security and self-sufficiency of those nations.