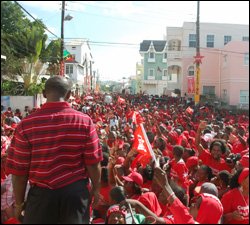 St. Kitts and Nevis’ Prime Minister Hon. Dr. Denzil Llewellyn Douglas will take the oath of office of Prime Minister of the twin-island Federation on Wednesday.

The Swearing in Ceremony will be held at Government House and will be attended by senior government officials, top Labour Party members, family members and close friends.

The Nevis-based Concerned Citizens Movement held on to its two seats, and the Nevis Reformation Party kept its single spot.