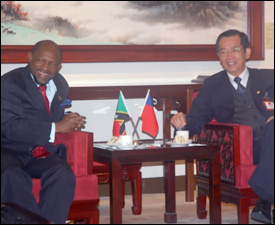 Prime Minister Douglas and his delegation will be guest of honour at a luncheon hosted by President Ma and a dinner hosted by Foreign Minister Yang.

During the visit St. Kitts and Nevis and the Republic of China on Taiwan are expected to sign a “Cooperation Programme on Model Tourism Farms.”

Other members of the delegation are Press Secretary to the Prime Minister, Mr. Erasmus Williams and Information Officer, Mr. Charles Jong.

Prime Minister Douglas and his delegation visited Motech Industries, the largest solar cell manufacturer in Taiwan and one of the top ten manufacturers worldwide in terms of production capacity and output on Tuesday. In addition, Motech is also Taiwan’s leading provider of photovoltaic systems and photovoltaic inverters.

Visits will also be made to the National Kaohsiung University of Hospitality and Tourism, the Xinsheng Park, the Lanyang Museum and the Horticulture Department at King Car Biotechnology Industrial Co. Ltd.