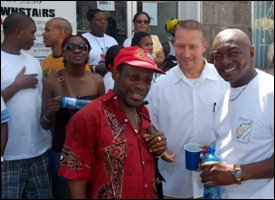 As the bands ““ ODISI, Ultrasonics, Kasanova and Ronny Rascal’s Extreme Revellers, passed with their hundreds of revelers around the streets of Charlestown, the revelers and vocalists greeted Prime Minister Douglas with the refrain “It’s Working,” EE A Wuk,” Mr. Prime Minister It’s Working,” “E a Wuk, Mr. PM,” and “Mr. PM.. E a Wuk.”

Prime Minister Douglas, who was among the thousands of persons viewing the J’Ouvert, had travelled earlier to Nevis on the Sea Bridge.

For breakfast, Dr. Douglas patronised the booth operated by the Nevis Nurses Association. He was interviewed by ZIZ Radio and Television, Info Channel on Nevis Cable 8 and Choice Community Radio 105.3 FM. Live streaming of the J’Ouvert was seen on Nevis Amateur Athletic Association with the assistance of TIME – Total Interactive Media Experience.

Scores of Nevisians and Kittitians, returning nationals and visitors used the opportunity to greet Prime Minister Douglas as he watched the J’Ouvert from several areas.

Dr. Douglas lunched at Sunshine’s where he was again greeted and took photos with Nevisians living overseas and who were visiting for Culturama.

After lunch the Prime Minister visited the Indian Castle Race Track and was among the spectators watching the five races organized by the Nevis Turf and Jockey Club.

He was invited to view the horse stables and inspected the horses before and after the races. Dr. Douglas used the opportunity to compliment the jockeys, trainers, owners and sponsors as he anticipates Beaumont Park now under construction.