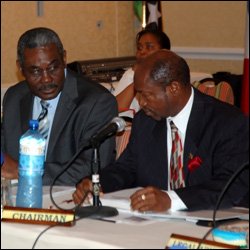 In brief remarks as he assumed the Chairmanship of the Regional Security System (RSS) Council of Ministers during a meeting at the St. Kitts Marriott Resort, Prime Minister Douglas stressed the need for continuing the close collaboration of the RSS.

“The RSS needs to continuing to re-examine its operations in light of the challenges being faced,” said Dr. Douglas.

Dr. Douglas also used the opportuinity to express thanks to the outgoing Chairman of the RSS Council of Ministers, the Prime Minister of Grenada, the Hon. Tillman Thomas and welcomed the new Antigua and Barbuda National Security Minister, Dr. the Hon. Errol Cort.

The Regional Security Council of Ministers is the supreme policy making body of the Regional Security System (RSS) and comprises Ministers of Defence and Security in the member states of Antigua and Barbuda, Barbados, Dominica, Grenada, St. Kitts and Nevis, St. Lucia and St. Vincent and the Grenadines.