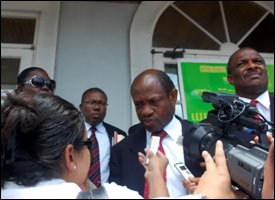 PM Douglas Outside The Court House
Photo By Erasmus Williams

Dr. Douglas, who walked from his Church Street Government Headquarters Office to the Lee Llewellyn Moore Judicial and Legal Complex on East Independence Square Street, was greeted by scores of party supporters as he passed through the square.

In his statement on the steps of the Complex following the end of the morning session of the hearings, Prime Minister Douglas said he went to Court to lend support to his Attorney General, Dr. the Hon. Dennis Merchant and Member of Parliament for Constituency Number 8, Hon.  Cedric Liburd on contempt of court proceedings brought by a local opposition parliamentarian.

He also cautioned Caribbean lawyers who are prominent members of opposition political parties that they must not allowed themselves to be used by PAM to “destabilise St. Kitts and Nevis.”

“This is a political trial brought by PAM against my Government and the people, to delay the general elections because they are not ready as neither Lindsay Grant nor the Hon Shawn Richards can provide a Certificate of Renunciation of their United States Citizenship as required by law.  They are using the Court to launch a political attack,” said Dr. Douglas to the news media as several supporters cheered loudly.

“They cannot do it themselves. It is interesting to note that their attack is not led by even a single lawyer of the Federation. They hide behind others from outside. They have brought into the country, among others, two politicians to lead the attack against the Government of St. Kitts and Nevis and its people, Ms. Mia Mottley, Leader of the Opposition in Barbados and Mrs. Kamala Persad-Bissessar, Deputy Political Leader of the Opposition of Trinidad and Tobago,” said Prime Minister Douglas.

“I wish for these politicians from outside to be advised that they should not allow themselves unwittingly to be used by the PAM to destabilize the country of St. Kitts and Nevis.
He pointed out that PAM in its pursuit to use the Court to further their political agenda have served Government lawyers with Affidavits of Mr. Richard Caines, a former member of the PAM Administration and also the former Prime Minister in the PAM Administration Sir Kennedy Simmonds.

He said he has been advised that on Tuesday one of the Counsels for the PAM Legal Team told the Court that they were going to seek a subpoena to summon him to Court.

“I hope that by my presence here in Court today, they will be aware that so long as I’m advised by my lawyers to attend Court, I will have no difficulty in so doing,” Prime Minister Douglas told the media.