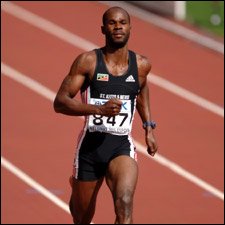 “The performance of the team in the World Championship relay finals as well as Kim Collins performance throughout the entire championships has made us proud to be Kittitians and Nevisians and no doubt people of the Caribbean,” Grant said.

Basseterre, St.Kitts (Sept 4th 2011):-Leader of the People’s Action Movement Lindsay Grant and the entire executive and membership of the his party along with nationals and residents of St.Kitts-Nevis congratulate Kim Collins and Team St.Kitts-Nevis including Brijesh Lawrence, Antoine Adams, Jason Rogers and Delwayne Delaney on their magnificent and unprecedented bronze medal 4 x 100m relay performance at the IAAF World Championships in Daegue, Korea.

Grant commented “The achievement of these young men on the World stage shows the determination and fortitude which is characteristic of the Kittitian and Nevisian spirit which suggests that discipline, will, courage, heart and mettle can overcome humble beginnings and result in World Class success and achievements.”

“The performance of the team in the World Championship relay finals as well as Kim Collins performance throughout the entire championships has made us proud to be Kittitians and Nevisians and no doubt people of the Caribbean,” Grant said.

The Opposition Party Leader continued ” The success of Kim along with Antoine, Brijesh, Delwayne and Jason will undoubtedly be an inspiration to young people not only here in St.Kitts-Nevis but throughout the Caribbean region. This is extremely important as the very existence of our young people, particularly our young men,  in St.Kitts-Nevis is being threatened by crime and violence and it is achievement like these which will help to inspire and to influence a change of direction for many of our wayward youths.”

Grant also chided the government to seriously consider and embrace the economic opportunities that the performance at the World Games can bring to St.Kitts-Nevis.

“This is a another proud moment in the history of St.Kitts-Nevis and it provides our country with yet another golden opportunity and I would encourage,  in fact chide the government,  to  embrace these performances as an achievement for ALL of us and not just some and  we all should significantly nurture the economic benefits it could bring to our besieged  economy,” Grant advised.

The Party leader also congratulated the entire team management and entourage, “I must also extend congratulations to the entire SKN contingent including management and coaches as well as the local SKNAAA and NOC by extension as they would have no doubt provided the necessary moral, spiritual, technical and financial support necessary .The whole of St.Kitts-Nevis rejoices as we once again prove that we small but we tallawah”.

St.Kitts-Nevis won the bronze medal in the IAAF World Championship 4 x 100m relay in a time of 38.49 secs. This was the second medal of the games for team SKN and Kim Collins who also won Bronze in the 100m finals.