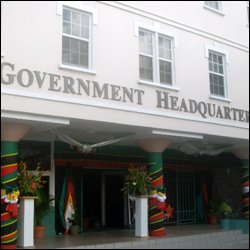 Two candidates for the opposition People’s Action Movement (PAM) have been accused of blatant attempts to engender strife by targeting non-nationals in St. Kitts and Nevis.

The Ministry of National Security has labelled statements by Mr. Roy Fleming and Mr. Eugene Hamilton in relation to the “˜issuance of passports to persons who do not qualify” and “discrimination and victimization of non-nationals” respectively “politically motivated and are blatant attempts to engender strife; targeting the non-nationals in the Federation.”

In a statement Thursday, the Ministry said it has an open door policy and as part of its public education process, has been assisting non-nationals who have sought information regarding the various procedures that relate to their immigration status in the Federation.

“The Ministry has received commendation from the public for its efforts to ensure that all queries are addressed in a manner in keeping with the laws of the Federation, especially in relation to work permits, residency, visa application, citizenship, etc.,” it said in the statement.

The Ministry of National Security noted that there have been several reports of Mr. Fleming’s alleged practice of extending special favours to immigrants in an attempt to secure their political support.  The Ministry has, therefore, concluded that Mr. Fleming’s charges of the Government discriminating against immigrants and/or victimizing them, could only be related to Mr. Fleming’s own politicking and his Party’s ineffectiveness at building support within the immigrant community.

The Ministry said it has used every opportunity to dispel any fear in the minds of CARICOM nationals and non-nationals in general, being mindful of the reports that it receives from concerned individuals.

With regard to matters raised by Mr. Hamilton, the Ministry said it knows of no instance in which passports have been promised to or given to non-nationals in return for votes.

It said statements like these unfairly bring the reputation of the civil service into question and amount to a deliberate attack on the non-nationals resident in the Federation.

The Ministry of National Security said it is apparent that these two PAM candidates are misrepresenting the facts “to confuse the non national community and gain political mileage.”

It said that residents and visitors who are desirous of being informed on any matter related to their status should visit the Ministry directly to avoid being misled by individuals who are peddlers of falsehood with their own agendas.

The Ministry said it intends to remain vigilant to ensure that the alleged practice does not take root in the Federation.

It called on Messrs Hamilton and Fleming to desist from making unfounded statements and displaying their ignorance of the processes that result in qualification to hold a passport of the Federation of St. Kitts and Nevis.

“These actions are unbecoming of anyone seeking office. The Ministry urges levelheadedness in this period of campaigning,” said the statement.