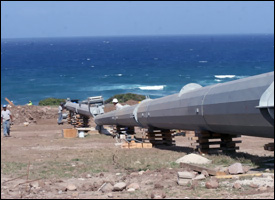 Though among the smallest islands in the Caribbean, Nevis has shown that barriers could be overcome in the area of renewable energy. Those words came from Project Consultant of the Caribbean Renewable Energy Development Programme (CREDP) and the German Agency for Technical Cooperation (GTZ) Mr. Thomas Scheutzlich, at the official launch of the WindWatt Nevis Ltd. Wind Farm at Maddens Estate recently.

Mr. Scheutzlich said Nevis was on the right path and the size of the island was a non issue in its leadership role in the development of renewable energy.

“Together with a remarkable geothermal development and prospective, Nevis is one of the smallest Caribbean islands but it’s on the right way and sets out milestones and examples for other islands to follow.

“This is also a great value for the entire Caribbean Region, showing how barriers can be overcome to use wind energy and renewable energy in the wider sense in the OECS and the entire CARICOM region,” he said.

According to the CREDP Consultant, all the parties involved in the wind farm’s development and the people of Nevis, should be proud of their achievement since it was not the size of the wind park that mattered but its symbolic meaning.

“This wind park marks not only the first step for Nevis getting independent from imported fossil fuels but also a very important step for wind power development in the OECS region and the entire CARICOM Region,” he said.

Mr. Scheutzlich disclosed that Nevis had overtaken more than three islands that were much more advanced years ago, in their wind development programme than Nevis. Those islands he said which were also supported by CERDP continued to lag behind.

However, he registered hope that the wind farm on Nevis would serve to accelerate wind power developments in other countries.

“Utilities are keen on developing wind power but there still hesitating, laying back to see what others are doing. In this regard again Nevis took the risk to have the first wind park in this part of the Caribbean.

“I should mention that the other wind parks in Barbados, St. Lucia, St. Vincent, Grenada, Dominica and Antigua the glass for them is more half full than half empty. So we are confident that we will see more wind development on the other islands and Nevis again, is setting examples for this,” Mr. Scheutzlich said.

The CREDP Consultant wished the developers/operators of the WindWatt Wind Farm and the Nevis Island Administration a very successful operation of the facility and that the high expectation of the farm for Nevis and the other Caribbean islands, which were on the same track but behind the development in Nevis, would be fulfilled.