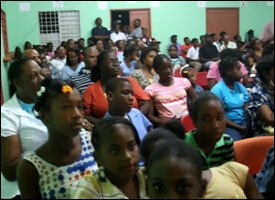 The Crowd Looks On During Quiz Competition

The St. Thomas Primary School made history before a packed hall on Monday, when they captured the annual Inter-Primary St. Johns Community Improvement Club (SJCIC) Quiz contest for the third consecutive year.  The event was sponsored by the Nevis Corporative Credit Union (NCCU) and was held on November 24, at the Mandela Community Centre at Cole Hill.

The victorious team of Master Orian Stapleton and Ms. Soroya Warner also walked away with top prizes and trophies for Best Individual Performance and runner up respectively in the competition.

This was the first time in the 27-year history of the competition that a school had retained the championship title for three consecutive times and also the first school to win the best student and runner up titles in the same competition.

The students from all 8 primary schools on Nevis competed in four categories ““ Language Arts, Science, Social Studies and Mathematics.

Minister of Youth and Area representative Hon Hensley Daniel was on hand to witness the event and so was St. Thomas Primary’s Principal Ms. Earlene Maynard.

In a brief interview with the Department of Information, the Principal expressed joy over the performance of her students, for having made the institution proud and having created history.

In the final scores the St. Thomas Primary School scored 55 points, Charlestown Primary came second with 45 points. St. Johns Primary and the Ivor Walters Primary each scored 40 points but St. Johns edged out as third place winner after a tiebreaker.

The Violet O. Jeffers Nichols Primary and Maude Crosse Prep followed with 30 points each. Then came the St. James Primary with 35 points and the Joycelyn Liburd Primary School captured 25 points.