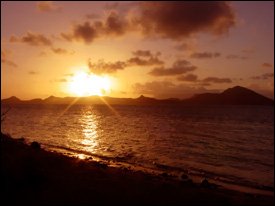 Sunset Over St. Kitts As Seen From Nevis
Photo courtesy of Nevis1.com

A Public Holiday – St. Kitts – Nevis gained independence from Britain in 1983.  Military Parade at Grove Park.  Independence Race Meet – Horse Racing is held at the Indian Castle Race Track and staged by the Nevis Turf and Jockey Club. First race is at 2:00 p.m. Sideshow includes musical entertainment and Pari-mutuel betting. More information can be obtained from the Nevis Equestrian Centre or by e-mailing John Guilbert, or by calling  869.469.5786  869.469.5786 .