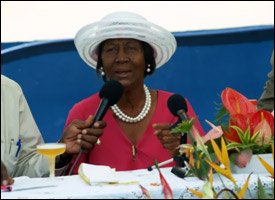 Nevis Premier and Minister of Education, the Hon. Joseph Parry commended Mrs. Joycelyn Liburd at the School Renaming Ceremony on Thursday, October 8th at the Grounds of the Gingerland Primary School, as the school was renamed in her honour.

Premier Parry, in his Feature Address, said Mrs. Liburd has had a distinguished career in education and in guiding the young generation.  Mr. Parry said he was proud that the school will be renamed the Joycelyn Liburd Primary School and suggested that a photograph of Mrs. Liburd should be prominently displayed in the school in recognition of Mrs. Liburd’s outstanding contribution to the school over the years.

The Renaming Ceremony was part of the schools 30th Anniversary Celebrations, which have as their theme: “Providing a sound education for the youths of this nation-past, present and future.”

Master of Ceremonies, Cabinet Secretary, Mr. Ashley Farrell said he was pleased that the community of Gingerland chose Mrs. Liburd as she has had a stellar career as an educator.

In her response to past and present teachers and students and well wishers, Mrs. Liburd stated that parents must work with their children and have a relationship with their children’s teachers. “I am sending out an S.O.S to Save Our Schools.”

Mrs. Liburd, who is the mother of former Calypsonian, Abonathy Liburd, was an educator who taught after school classes at no charge, gave free lunches to children in need and gave  of herself to the school and community of Gingerland.

Premier Parry concluded that a photograph of Mrs. Liburd must be put up in the school in recognition of her great contribution to the school over the years.