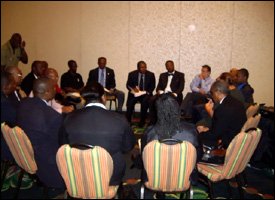 Premier of Nevis, the Hon. Joseph Parry and Leader of the Opposition in the National Assembly, the Hon. Mark Brantley are giving support to the efforts of the Federal Government to fight crime.

The Nevis Government Information Service in a statement said Premier Parry has “given strong support for new initiatives being considered by the Federal Government of St. Kitts & Nevis to help fight crime in the twin-island nation.”

The Premier gave his assurance during a recent meeting with former Federal Bureau of Investigation (FBI) Assistant Director in New York, Mr. Mark Mershon, that the Nevis Island Administration, (NIA), will work with the Federal Government to assist with programmes to reduce the rising crime on the island.

“A lengthy discussion was taken on crime in the Federation, more specifically Nevis. The former agent talked about his experiences in the United States of America and we indicated to him the problems of gangs, use of drugs and guns in Nevis,” Premier Parry is quoted by the NGIS.

The top Nevis official is making arrangements for the former FBI agent to dialogue with representatives from the Christian Council, the Chamber of Industry and Commerce and the Evangelical Association and will continue similar meetings, as efforts continue to combat crime on Nevis.

Leader of the Opposition in the National Assembly, Hon. Mark Brantley told members of the St. Kitts-Nevis List that he has met with Mr. Mershon.

“He appears a very serious and very committed law enforcement official who is genuinely motivated to arrest this decline into chaos that we have been experiencing in St. Kitts and Nevis. I think we should give him a chance to see what results he can achieve,” said Mr. Brantley, who is also an elected member of the Nevis Island Assembly.