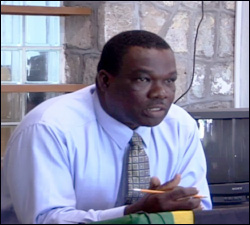 Police on Nevis met their target to reduce crime by 10 percent in 2010 over the previous year, a success attributed to the hard and dedicated work of the officers stationed at the Royal St. Christopher and Nevis Police Force – Nevis Division. The theme for that year was “Safer Communities through Partnership”.

Head of the Division Inspector Hilroy Brandy, made the disclosure while he presented an overview of the period at the 8th annual Police Constables Appreciation Awards Ceremony 2011 on February 12. The event was hosted by the Strategic Plan Group of the Nevis Division at the Occasions Conference Centre at Pinneys.

“The successes achieved under this period could not have been realised without the hard work of the dedicated men and women in the Division. The main reason for this evening’s function is to honour the men and women who gave outstanding performance during the period under review.

“Let me admonish you awardees that the journey has just begun. It is not the duration of life but the donation you make to life that really counts,” he said.

Inspector Brandy also acknowledged the efforts of the other officers in the Division for what he said was their dedication and performance in 2010. He said though they were a small unit, they teamed up to conduct several operations among them Eagle, Rescue, Smashdown, Takedown and Takeback.

Mr. Brandy explained that reported crime had increased by 32 or 9.5 percent in 2010 over that of 2009 and so did the detection rate which rose by 45 crimes or 10 percent.

However, in spite of the success there were increases in three offences for the corresponding period. Inspector Brandy listed an increase of two murder offences over 2009 with five in 2010. The number of Burglary offences increased from 17 in 2009 to 48 in 2010. Drug offences saw the greatest jump with 56 recorded in 2009 and 72 in 2010.

Notwithstanding, Mr. Brandy acknowledged that crime fighting was the responsibility of everyone on Nevis though the Police was charged with the task of keeping the communities safe. He said they relied on community partnerships to accomplish that task.

He used the opportunity to thank the Nevis Island Administration and the community at large for their outstanding assistance given to the Nevis police in 2010 and for their continued support in the years ahead as they strived to make the island of Nevis a safer place to live for residents and visitors alike.