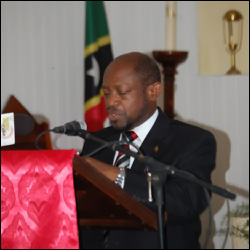 St. Kitts and Nevis Prime Minister the Rt. Hon. Dr. Denzil L. Douglas said Sunday that Nevis first Premier, the late Dr. Simeon Daniel has left an indelible mark on the island of Nevis and has touched many lives as a result of his outstanding services as a lawyer.

Paying tribute to Daniel during a Requiem Mass for late Labour Party stalwarts at the St. Paul’s Parish Church in St. Kitts, Prime Minister Douglas noted that Dr. Daniel was one of the persons who interacted with the Rt. Excellent Sir Robert Llewellyn Bradshaw and others who have served in his Cabinet at different times.

Pointing to Dr. Daniel’s efforts to transform the island of Nevis for the benefit of Nevisians, and indeed all who visit there today, the Prime Minister noted that Dr. Daniel was a founding member of the Nevis Reformation Party and committed himself to be a part of the pivotal decisions and the debates that would set the course of life in Nevis and, as a result, he had a direct impact on the social, political, and economic evolution of the island.

“His was a life in which God-given talents were, through sustained effort and dedication, realized.  And with his passing, we mark the end of an important era,” Dr. Douglas told the congregation and the Nation as the service was carried live on ZIZ Radio.

Mr. Daniel died on Sunday afternoon after a prolonged illness.