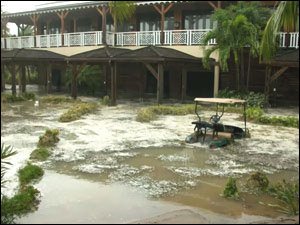 “An official of the Labour Department on Nevis, described as successful a two-day job fair for locals who wished to work on the refurbishment of the Four Seasons Resort.

Consultant to the Department Mr. Davidson Morton told the Department of Information on Wednesday, that he was pleased to see that the Nevisian public had taken the opportunity to seek employment at the fair which ended on Tuesday.

“The job fair which was the brain child of the Hon. Premier and the government I think was an overwhelming success in terms of the response that we had from the people.

“On the first day we had about 500 persons showed up to be interviewed and the second day we had about 200. So in all we had at least 700 persons seeking employment. Some of those persons who did come to the Job fair do have other jobs but they were seeking a second or part time employment,” he said.

Mr. Morton also said that the information gleaned from the applications of hundreds who turned out to the fair, would be of use to the Nevis Island Administration (NIA), in its endeavour to provide employment for Nevisians in particular the women.

“There were quite a lot of females there and what is going to happen subsequently is that some persons who may not find gainful employment there, the government is going to be looking very seriously at finding alternatives.

“That information that was made available is going to become very useful in the short run and in the long run to see what we can do especially to accommodate our females,” he said.

The job fair was set up by DCK a company based in Pittsburgh, to allow one of its sub contractors Mexico based Ocean View Construction, to seek local employees in various aspects of construction for the next six months.

The Resort which was closed earlier this year, was damaged during the passage of Hurricane Omar through the Caribbean in 2008.