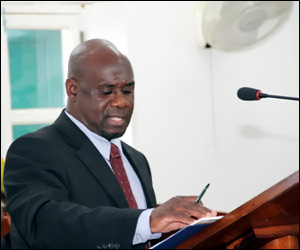 Mr. Jeffers who was at the time delivering a report on various ministries under his responsibility at a recent sitting of the Nevis Island Assembly explained that some policy changes had already began to bear fruit.

“When we assumed government in January of this year, the cash balance we met there was just over EC$500,000 and about US$75,000, chum change, but anyway, we have been able to, you know, weave our way through some murky waters and some challenges, We are still there.

“In terms of construction, currently we have just about 12 houses under construction and one…of the policy’s we have currently is that persons who need a house would have to go to a financial institution to get a loan and we have been getting some of those loans approved. Indeed we have an average of about six requests for housing monthly, and the applications that are going to the different financial institutions have been getting some favourable results from that and we appreciate that very much,” he said.

According to Mr. Jeffers, the Corporation had, at present, 11 houses under construction and commended the contractors that were engaged to construct them.

He noted that the NHLDC under his watch had made it its business to ensure that all new contractors were capable of delivering completed houses that met their requirements.

“We have certainly made it our business to ensure that we employ or engage reputable contractors because we have a huge amount of complaints that are stemming from 2009, 2010, houses that were built back in those days.

“We are handling those. It is our responsibility to. I’m not complaining about it but at least I’m highlighting those to show you that we continue to do what we have to do, as a government, to ensure the people of this country are comfortable and we indeed are trying to erase some of those negatives that we would have met there at the Corporation,” he said.

Also, apart from actual enhancement work done to the NHLDC building and grounds, Mr. Jeffers disclosed that a substantial sum of money had been spent on the computer system in the continued quest to turn around things at the Corporation.

“We have gone about spending some significant amount of money to upgrade the computer system and the computer network there. So all in all we continue to do whatever is necessary to turn around a bad situation and I think we are headed in the right direction and with the work that we are doing, I do believe that we will get that task done,” he said.

Meantime, Minister Jeffers who is also responsible for Cooperatives, used the opportunity to recognise the contribution of Ms. Donna Browne whom he said had recently retired from the Civil Service.

“Let me recognise the contribution of Ms. Donna Browne, who would have retired just a few weeks ago. She was the past Director of Cooperatives and indeed we want to commend Ms. Browne for her sterling contribution to not only the Department of Agriculture but, you know she was a teacher for many, many years, so she would have contributed to the overall success of this country in many ways, in education and also recently being the Director of Cooperatives… I wish her well in her retirement,” he said.