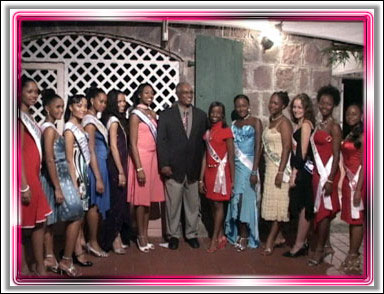 “If we truly want the Caribbean to be one, we have to learn to communicate; not by words nor television, but by travelling and meeting one another,’ said Premier of Nevis, Hon. Joseph Parry.

The Haynes Smith Miss Caribbean Talented Teen pageant has been a part of St. Kitts Carnival for over 20 years.

As part of his remarks Mr. Maynard, thanked Premier Parry for all of his assistance of making the pageant a tremendous success over the years.

“I remember back in the 80’s when Premier Parry was then a Minister of Tourism in St. Kitts, I visited him to get something done for the pageant, and he didn’t hesitate and immediately said yes! Last month I asked him if he would host a cocktail for the ladies of the pageant and again he didn’t hesitate and said yes! In the name of Tourism and Caribbean unity, Parry has always been a visionary.”

The highlight of the cocktail was the introduction of the contestants, who graciously represented their respective countries and presented gifts to Mr. Parry, who was very pleased to receive the unexpected presents.

The show took place in St. Kitts on Saturday, December 29th, where the very beautiful and talented Ms. Anguilla captured the audience and the hearts of the judges.