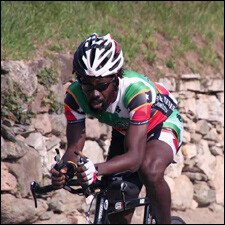 Members of the Nevis Cycle and Triathlon Club (NCTC) took to the roads of Nevis on Saturday, January 2nd for a 3 lap -38 km road bike race.

The 2010 race season started as National Champion Reggie Douglas is the man to reckon with, but James Weekes has been showing great performance recently.

Also in the mix is up- and- coming Assim Chapman who is only fourteen (14) years old but already has the legs of a seasoned biker.

The ladies were represented by elite rider Ms. Monica Ceccon who was on hand to fly the flag for the women.

In the final outcome Reggie and James worked hard for the top spot, with Reggie taking the win in the sprint for the line.  Third place went to young Assim and Monica took fourth.

“The NCTC is looking forward to a great season of races during 2010,” said NCTC President Mr. Greg Phillip.