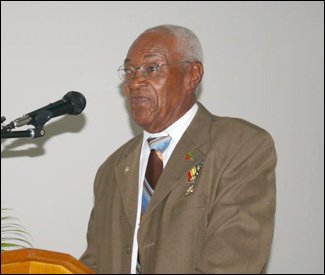 Franklyn Anderson Browne, retired Nevisian educator and tireless community worker has been awarded the Member of the British Empire (MBE) in the Queen’s New Year’s (2013) Honours.

The announcement was made by Prime Minister the Rt. Honourable Dr. Denzil L. Douglas in his New Year’s Day Message to the Nation, who said the honour was bestowed “for his long, dedicated and outstanding contribution in education on the island of Nevis.” He was also listed in the Times of London on Saturday, December, 29.

Browne was one of two nationals honoured, the other being Kittitian Mr. James Williams, a former High Commissioner at the Court of St. James in London. Williams was conferred with the Order of the British Empire (OBE) for his contribution to national development through his work in the public service.

Premier of Nevis, the Hon. Joseph Parry said he and the Cabinet of the Nevis Island Administration (NIA) through the influence of the Attorney General of St. Kitts-Nevis, the Hon. Patrice Nisbett had recommended that the highly-decorated honour of the MBE be bestowed on Mr. Browne who has served the people of Nevis well, particularly the residents of St. James and St. George’s parishes.

According to the Premier, Mr. Browne has been an outstanding educator, civic-minded person and a family man who has raised his ten (10) children, and other children of the community.

“I am absolutely delighted that the MBE has been awarded to Mr. Browne as it gives him much deserved recognition for his work in Education and the community. I learned first-hand from him as a student when he taught at St. Thomas’ Primary School for a short stint,  he had an immediate impact on St. Thomas’ parish, and I learned later the effect he had on students and parents from St. James’ and St. George’s Parishes,” said the Premier.

The Hon. Joseph Parry also stated that Mr. Browne was a hero, “a simple grass-roots hero, nothing fancy. Just a Nevisian who cared for others.”

According to the Premier, Mr. Browne had demonstrated a love of persons, and over the years he gained tremendous respect from teachers, parents and students alike, which continues today with all who come in contact with him.

“As the government continues to honour those who made their mark on Nevis, I must say that, Mr. Browne, is among one of the most deserving,” concluded the Premier.

In September 2008, just days after his 80th birthday Mr. Browne was honored by past students of the New River All-Age School, for his life work in education in Nevis.

In August 2012, on the insistence of Attorney General of St. Kitts- Nevis and Federal Representative of St. James and St. Thomas Parish, the Hon. Patrice Nisbett, the NRP-led Nevis Island Administration named the newly-constructed Combermere Community Center in honour of Mr. Franklin A. Browne.

Mr. Browne hails from Camps Village in the parish of St. James, and studied at Erdiston College in Barbados and Cumberland University in the United Kingdom. He has been married for the past 60 years to Lorraine, also a former teacher, who also hails from St. James Parish.

Mr. Browne is a survivor of the worst boating disaster in the history of St. Kitts-Nevis, the MV Christena, which sank off Nags Head in the Narrows on Saturday, Aug. 1, 1970, a tragic event which took the lives of scores of Nevisians and Kittitians. His son Roger, then in his early teens, also survived.