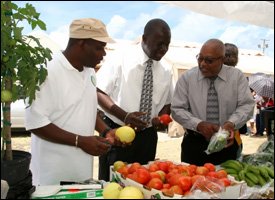 In a recent interview with the Department of Information, the Agriculture official said his team was eagerly anticipating the two-day event which is scheduled for March 24th and 25th at the Villa Grounds in Charlestown.

With emphasis on variety, the event will be held under the theme “diversify to satisfy” and is expected to showcase varying aspects of Agriculture on Nevis from fruits and vegetables to plants and animals.

“We started our planning since last year and now that we are in 2011 our planning has intensified somewhat and of course with it just being a matter of two weeks away our planning is expected to get into high gear very shortly,” Mr. Evelyn said, adding that the event would feature representatives from “the allied agencies, government departments and the farming industry.”

Following the DOA’s trend of alternating patrons from the three departments within the Ministry of Agriculture, Mrs. Althea “Sally” Parris was selected to be in the spotlight this year.

The Rawlins Village resident, according to Mr. Evelyn, “had been involved in crop production for a very long time.”

“She is one who has been very consistent and she’s at the Open Day every year since we would’ve started and so we are happy to honour her this year as our patron,” he said.

Taking example from the Nevis Island Administration’s Ministry of Agriculture, the DOA has, over the years, “encompassed all three departments” [fisheries, cooperatives and agriculture] for its annual Open Day activity.

“We are encouraging participants to get ready and mark the dates. The Department of Agriculture will be putting on the usual exciting and educational activity. We are encouraging the support of all of you here on the island of Nevis,” Mr. Evelyn said.