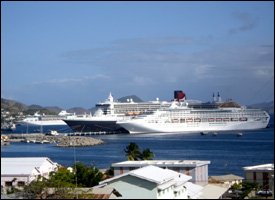 With the theme, “St. Kitts and Nevis is working” leading up to the next general elections, the Denzil Douglas-led St. Kitts-Nevis Labour Party Administration says cruise visitor arrivals at Port Zante, St Kitts, are expected to approach the half-million mark for the first time next season.

“This will represent an increase of 18 percent following a total of 419,266 berths currently being deployed at St Kitts for 2008-2009,” said St. Kitts and Nevis’ Minister of State for Tourism, Sen. the Hon. Richard “Ricky” Skerritt.

“In 2009-2010 we are looking at a confirmed net increase of 52,564 berths and an unconfirmed increase of 22,029. This promises to bring our total berths deployed to St Kitts from October 2009 to September 2010, to 493, 859,” said Sen. Skerritt who recently returned from his annual sales call on Florida-based cruise executives.

He said that if talks go according to plan, within the next few weeks he will be able to announce that St. Kitts will pass the half million mark.

According to Minister Skerritt, while sixty percent of cruise arrivals to St Kitts continue to be from Carnival Corporation family ships, the biggest contributor to next season’s increase is the fact that Royal Caribbean International/Celebrity Cruises will increase their deployment to St. Kitts substantially by over 100 percent to 147,748 berths.

“They are pleased with the initial feedback from the calls at Port Zante of the recently launched Celebrity Solstice and they are looking at St. Kitts with new eyes as far as itinerary development is concerned,” the Minister said.

Another contributor to this increase in arrival numbers is the return of one cruise line that has been missing for a while.

“We have been knocking on the door of NCL for a few years and I am pleased that at last we have received a positive response,” said Minister Skerritt.

Minister Skerritt said MSC is a relatively new and rapidly growing cruise line which has great promise for the future of Caribbean cruising.

Although Minister Skerritt has repeatedly said he is less concerned with arrival numbers and more focused on increasing expenditure per visitor, he stressed that the tremendous increase in cruise arrivals over the past three years is an excellent indicator of the interest that the St. Kitts brand has been generating in the cruise tourism market.

“While some other destinations are struggling to get new business, or to keep the ships they have, St. Kitts has been growing its cruise business, including having year round calls for the first time,” said Minister Skerritt, adding: “We must be careful not to take this growth for granted.”