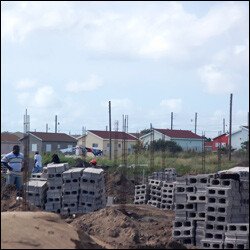 Homes Under Construction In Taylors Extension
Photo By Erasmus Williams

More homes for the residents of Taylors in East Basseterre.

Construction has begun on several homes in Taylors, where not a single home was built during the 15 years of the People’s Action Movement (PAM).

Since taking office in 1995, the Parliamentary Representative for East Basseterre, Dr. the Hon. Earl Asim Martin, has constructed 100 homes in Taylors alone.

Under the various housing programmes, 43 homes have been constructed at Taylor’s Extension, two at Taylors Housing, five in Taylors Village and 50 homes at Taylors Extension Phase 1.

Recently, Parliamentary representative for St. Christopher 7, Dr. the Hon. Timothy Harris complained of neglect as no homes were built in Philip’s and other areas of the constituency during the tenure of the People’s Action Movement (PAM).

“Not one block was used by the PAM government and the PAM representative in Phillips to build a house. Not even a little sand from Wash Ghut was used by PAM in Phillips’ in their 15 years in Government,” said Minister Harris in stressing his point.

The record shows that in their 15 years in office, the People’s Action Movement of Dr. the Hon. Sir Kennedy Simmonds, despite having a PAM Minister of Government as the Parliamentary Representative for St. Christopher #7, did not build a single house in several areas of that Constituency including Ottley’s, Upper Bourryeaux, Phillips’, Christ Church and Belle Vue.

332 homes have been built in St. Christopher 7 alone since the Denzil L. Douglas Labour Government took office in July 1995.

The PAM Government built a total of 251 homes in St. Kitts between February 1980 and June 1995 compared to the Labour Government’s total of 3,891 island wide between July 1995 and June 2009 under several housing programmes including the National Housing Corporation (NHC), Ministry of Housing/Department of Housing, House St. Kitts, CLICO, KOLMA, Imbert Construction Services and home loans approved by the Development of St. Kitts and Nevis.