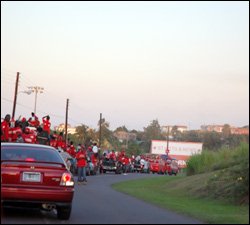 An Island-wide Victory Motorcade is planned by the St. Kitts-Nevis Labour Party on Saturday to celebrate the re-election of the party for a fourth consecutive five year term.

Prime Minister Douglas and other candidates are expected to use the opportunity to express thanks and appreciation to their supporters in the various constituencies.

The Nevis-based Concerned Citizens Movement held on to its two seats, and the Nevis Reformation Party kept its single spot.