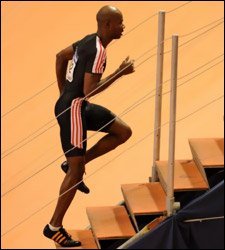 35 year old St.Kitts-Nevis and Caribbean Sprint Icon Kim Collins has once again done his countrya and the Caribbean proud with yet another memorable performance at the 2011 Daegu World Championships.

After blitzing through and winning all his preliminary round and semifinals races Kim came up against the World Record Holder Usain Bolt in the finals. The experienced Kim was cool, calm and collected while the record holder Bolt seemed anxious and nervous. This anxiety cost Bolt as he was disqualified after a false start.

This blew the field wide open with Collins no doubt being the favourite after having such impressive runs in the preliminary heats.

The starting gun went off and Kim got off to an excellent start and led the race for the first 60m and seemed well on his way to another World Championship Gold. However he faded in the last 30m and Jamaica’s Yohan Blake came through and won in a time of 9.92 secs. Beating Kim into 3rd place with a time of 10.09 secs. USA’s Walter Dix place 2nd and got the silver.

Collins will now prepare for his participation in the 200m and the 4 x 100m relays both of which he is expected to medal. The 200m prelims begins on Day 7 (September 2nd) whiles the relays will take place on the final day September 9th.