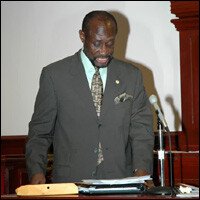 Former workers at the St. Kitts Marriott Resort aired their concerns Thursday to Deputy Prime Minister and Minister of Labour, the Hon. Sam Condor during a meeting at the headquarters of the National Emergency Management Agency (NEMA).

Minister Condor, who was accompanied by Labour Commissioner, Mr. Spencer Amory and Executive Director in the Office of the Prime Minister, Ms. Eudora Nisbett, empathised with the former workers regarding the recent termination of their service due to the drop in occupancy.

Mr. Condor informed the gathering that government had already begun to take appropriate measures to provide some form of relief and further advised that he held discussions with the various business leaders within the Federation who were also sympathetic to their situation and had already committed to partnering with the government in providing some form of assistance in an effort to alleviate some of the financial burden.

The former workers were then given an opportunity to air their concerns and to raise any other pertinent issues.  They were assured that these and other issues would be expeditiously addressed with the appropriate stakeholders and the government would continue the ongoing dialogue with the St. Kitts Marriott Resort.

Deputy Prime Minister Condor urged them all to access the facilities of the Department of Labour for further assistance, particularly the employment services unit for possible job placements.

The Labour Minister reiterated his governments’ commitment to endeavour to put the welfare of workers in the Federation of St. Kitts and Nevis as priority focus on the governments’ agenda.

Over 75% of the 100 persons who were terminated two weeks attended the forum and left the meeting expressing satisfaction and gratitude to the Deputy Prime Minister and his team for the information and assurance they had received.